More than 30 of Great Yarmouth's historic Rows will be getting a new look for the new year. 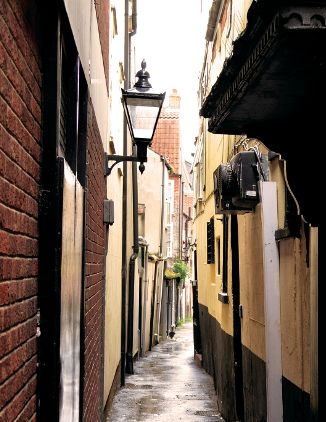 A £240,000 project overseen by Great Yarmouth Borough Council in partnership with Norfolk's police and crime commissioner will see the Rows - dozens of pedestrian alleys that run between the town's main roads - cleaned up, repainted, and fitted with new heritage lighting.

A new specialist cleaning machine will help keep all the town's Rows clean, and the a new community safety officer will be employed to work with people who live in, work in, and use the Rows.

The aim of the project is to help the Rows feel more welcoming and safer to use, improving the general feeling of safety across Great Yarmouth. The majority of the funding for the project was awarded to the council from the Office of the Police and Crime Commissioner for Norfolk, through its successful bid to the Home Office's Safer Streets Fund.

Council leader Carl Smith said: "The Rows are an important and fascinating piece of the town's history but they are also living places used by thousands of people every year.

"We want them to be more welcoming and this work will literally brighten them up and give us the tools to help keep them clean and tidy in the future."

Giles Orpen-Smellie, Police and Crime Commissioner for Norfolk said: "These improvements to the Great Yarmouth Rows are part of a wider programme of work in the county that is going ahead thanks to the Safer Streets funding we have received. This was the third round of Safer Streets funding that my office has been successful in bidding for and will see more than £400,000 invested in schemes across the county.

"Areas that are cleaner and well cared for can feel safer and more welcoming places to be, whilst the recruitment of a community safety officer will mean that residents and users of the Rows have direct access to support and can raise future concerns or issues.

"It is important to me that our response to making our county safer, particularly for women and girls, is embraced by the full spectrum of agencies in Norfolk as well as the police, and so it is particularly pleasing to see this work now getting underway in Great Yarmouth."

The historically important thoroughfares were once heavily populated areas, filled with the hustle and bustle of people living and working in the town during the heyday of the maritime and fishing industries. Great Yarmouth originally had over 145 Rows.

They were described by Charles Dickens as "grid-iron" that defined Great Yarmouth, with each Row "a long, narrow lane or alley quite straight, or as nearly as maybe, with houses on each side, both of which you can sometimes touch at once with the fingertips of each hand, by stretching out your arms to their full extent".

Owners of properties in the Rows who want to find out more about the project can contact steve@greyfriarspm.com for more details.

The rows included in the 2022 Safer Streets project are:

Since its launch, the government has committed £70 million to the Safer Streets Fund to support local areas across England and Wales to introduce initiatives aimed at stopping offences happening in the first place. In Norfolk, the current round of funding will see £427,245 invested in schemes in Great Yarmouth, King's Lynn, and Norwich. From previous rounds, Norfolk has received £442,000 to tackle burglary hotspots, make improvements to the safety of people's homes and install CCTV and £96,000 to provide further improvements to CCTV.