Following his many roles as a husband, father, grandfather, borough councillor, county councillor, business owner and chef, Cllr Graham Plant is readying himself for his next role as Mayor Elect. 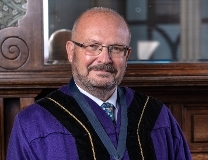 As Mayor of the borough, Cllr Plant will chair full council meetings, help to raise money for his chosen charities, which include Hemsby Lifeboat and Bradwell Scouts, and represent the borough at functions, both inside and outside of the area.

He will be officially elected to the ceremonial, non-political role at the next full council meeting on Thursday 12, May where he will take over from Cllr Adrian Thompson. His deputy will also be voted in at that meeting.

Born in Burnley in 1957, Cllr Plant and his family moved to Great Yarmouth borough when he was 11 and now lives in Bradwell. His mother was a District Midwife and his father worked in the oil and gas industry.

Before beginning in local politics, Cllr Plant began his training as a chef in Great Yarmouth and then headed to Switzerland where he completed his qualifications. As a fully skilled chef and restaurateur, Cllr Plant owned local businesses such as Browston Hall, Indiana's Temple of Doom, The Italian Restaurant, and managed the Bell Inn at St Olaves, and was Head Chef at the James Paget Hospital when it first opened for 12 years.

Cllr Plant now owns a fish and chip shop in Caister, which his son currently manages.

Cllr Plant's venture into politics began twenty-two years ago, when he became a councillor to try to change how Great Yarmouth Seafront was maintained.

Winning his first seat as a councillor of Hopton South ward in 2000 and Deputy Chair of Licensing, Cllr Plant was integral in the restructure of Great Yarmouth seafront and the introduction of horse and cycle lane that spans the Golden Mile. He also became the Cabinet member for Economic Development and Tourism.

Cllr Plant then become a councillor for Norfolk County Council in June 2009, for Breydon Division, and was subsequently elected to Gorleston St Andrews division in May 2017 and 2021.

Cllr Plant currently lives in Bradwell with his wife, where he is a ward councillor for Bradwell North. He has  two daughters, one son and six grandchildren.

Cllr Graham Plant, Mayor Elect, said: "I have lived in the borough for 54 years now and it's a wonderful honour and opportunity to be chosen by my fellow councillors to represent and promote the borough, its communities, businesses and other facilities for the upcoming municipal year."